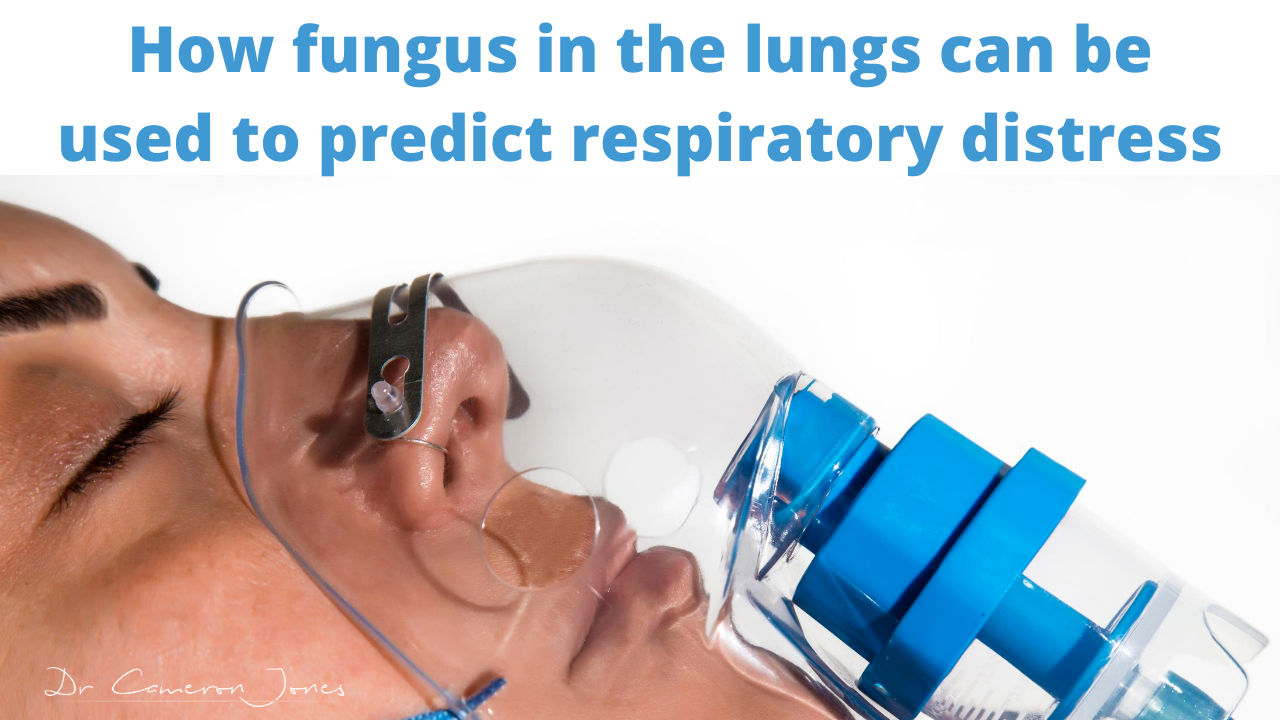 That's the topic of today's presentation. We're going to be talking about the fungus that grows normally in the lungs. I want to work out and talk to you about whether or not there is a connection between these types of fungi and being able to predict whether or not certain individuals are at risk of having respiratory distress. In order to do that, I want to review a publication which was presented on Monday this week. This is groundbreaking research, and it was done by a graduate student from the University of Pittsburgh by the name of Noel Britton.

She was looking at which microorganisms grow inside the lungs and I'm going to review her research work because it really is breaking research, it was presented at the European Respiratory Society. A lot more is known about the bacteria that grow inside the lung than the fungi. There are two terms which I need to explain and they're related. We've all heard of the gut microflora or the microbiome that grows in our intestines. And we're told in public health media that when this gets out of equilibrium, this has a cascade effect on our health. But scientists are determining that the microbiome and mycobiome, that is the fungal microflora that grow inside the lung, also have an impact on respiratory health and respiratory distress.

Obviously those individuals that might require mechanical ventilation are good candidates for those individuals who have respiratory distress. What this scientist and group of scientists did is they determined that the population of microorganisms that live in the lungs is in fact connected with the severity of something called acute respiratory distress syndrome. Now, the question is, before you get to the point of requiring mechanical ventilation, the scientists hypothesized that there could be different types of microorganisms that could potentially be used to predict whether or not certain individuals would go into severe lung distress. This is the hypothesis, which underpins why this scientist wanted to go and do this research.

Why is this important? Well, it's important for a couple of reasons. Acute respiratory distress syndrome, or ARDS can be defined as when fluid builds up inside the lungs, meaning that less oxygen reaches the blood. What does that do? Well, it leads to severe shortness of breath and many people who get ARDS don't survive. Now, we can go on to look at other reasons why this is important, but it's important at this point to reiterate that not a lot was known about which fungi grow in people until next generation sequencing became available.

This is exactly what this research team has used to determine what microorganisms are in fact growing inside the human lung. Using this technique, they were able to determine not only what fungi were growing, but how many of them there were. And they were also able to then correlate this with various different biomarkers of inflammation. And so this is really groundbreaking research. If we look at what did they discover, we can now look at that and they looked at 202 people who were admitted to hospital and needed mechanical ventilation. These individuals had swabs taken within 48 hours of being intubated. These were then subjected to genetic analysis and they determined that over 50% of the microflora in those patients who have severe lung injury were candida microorganism.

Not only that, then a biomarker called PTX-3 was also elevated in these individuals. The most important takeaway from this research is that people with lung disease had lower diversity. That means that they were over-colonized with one or a few specific types of fungal microorganisms. According to her research, candida was the dominant microorganism. Now, this leads me towards the conclusions to this, because why is this important and how can you use this research? Well, in summary, she was able to show that lungs that are predisposed to having an adverse respiratorial outcome have low diversity, meaning that there is an overabundance of one or more fungus in there. But the biomarker, this PTX-3 is also able to be used to work out whether or not there is inflammation present.

So you should discuss the suitability of testing for this biomarker with your own doctor. And the take home message is that a disequilibrium or an out of equilibrium, mycobiome in your lungs could predispose you to very serious negative consequences if you require mechanical ventilation. Now, I should also say that I've put up a photograph here to put this in context. Just as we find diversity of plant life in a garden to be aesthetically pleasing or beautiful, we want a diversity of different fungi present in our lungs. And when we have overgrowth of one type, it can lead to serious adverse health consequences.

As we move into our week, the take home message is that low diversity is connected with adverse lung function. As always, all of the research and all of the publications that I've used in preparing this short live stream are in the show notes below. If you're watching the video, I'd like you to take some time to subscribe to me on YouTube or to like the Facebook page or subscribe on iTunes. My name's Dr. Cameron Jones. I'll be bringing you more breaking public health news that you can use in the coming weeks. In any case, stay safe and bye for now.

Abstract no: 3044, "Diversity of the lung microbiome is associated with severity of disease in acute respiratory distress syndrome", by Noel Britton et al; Online from Monday 24 August and presented in the "New insights into mechanical ventilation in the intensive care unit" session at 09.30 hrs CEST on Monday 7 September: https://k4.ersnet.org/prod/v2/Front/Program/Session?e=259&session=12387