Can toxic indoor mould cause immunosuppression? 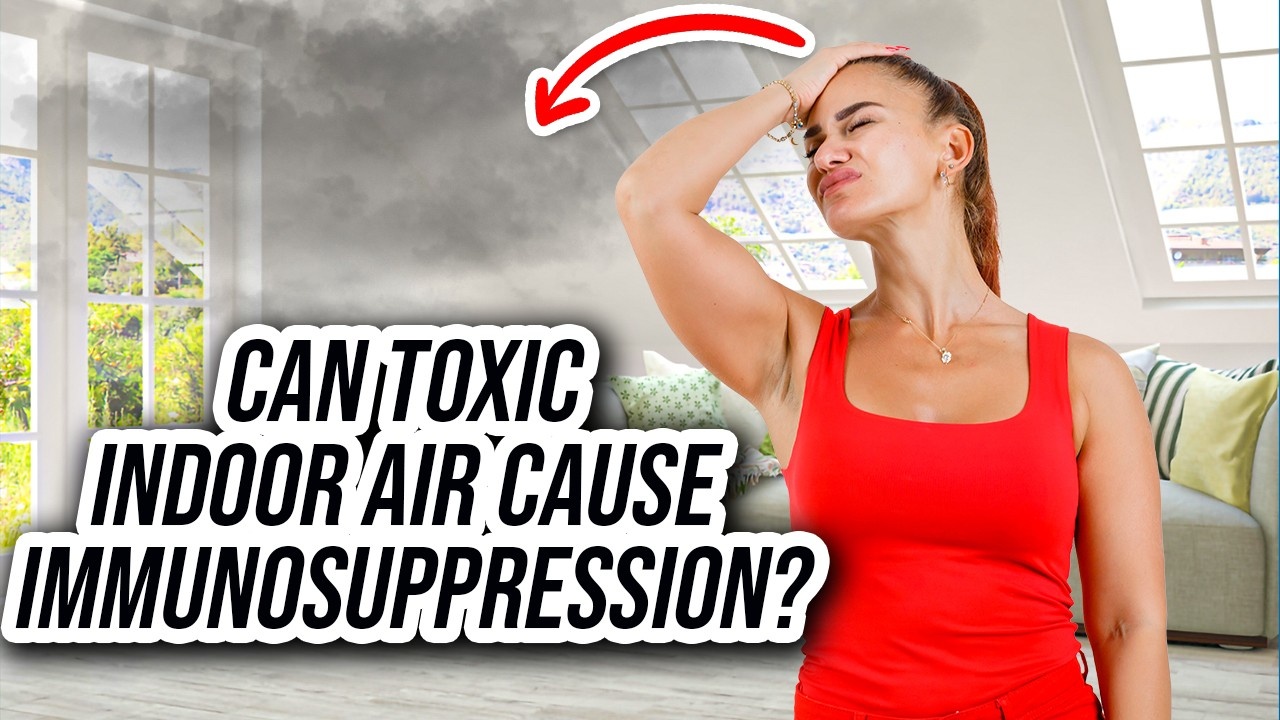 Imagine that at your workplace - you move to new offices and these offices are sited partially below ground level. Within three months of moving into the new offices, every person who works there has started to suffer from symptoms that are consistent with exposure to a water-damaged building and are reacting to the microbes and moulds that are commonly found in these environments.

When the symptoms became unbearable, the office staff started looking for answers. This week on The Mould Show, I'm going to be reviewing the research results that carefully examined each of those office workers to work out two things:

Firstly, was the building contributing something toxic that the workers were being exposed to? And secondly, how could this be best measured by the medical doctors who were involved?

We all know that there's a shopping list of common symptoms associated with mould. Typically this includes headaches, fatigue, coughing, irritation, sneezing, the potential for severe illness, and even acute infections. But knowing about these tell-tale symptoms doesn't always help affected individuals stop the source of the problem.

This publication looks at whether or not immunosuppression and adverse events can be measured. And if so, how does one go about doing this? This publication appeared on the 21st of January 2022 in the Journal of Fungi: Toxic Indoor Air Is a Potential Risk of Causing Immuno Suppression and Morbidity-A Pilot Study.

What the scientists did was examine both the patient (that is the occupants of the workplace), and they also looked at the building to see what type of toxins and microbes could be detected.

So essentially, they did two things:

This is a really interesting approach because it looks to investigate whether the person suffering the symptoms demonstrates high levels of mycotoxins.

The purpose of the research was how to prove causality between the symptoms experienced by the workers and exposure to the toxic indoor air. But the scientists weren't satisfied with just using microbiological technique to measure for mould, because it's well recognized that even though these tests are very sensitive and accurate to measure mould spore levels in the air - they can often miss the breakdown fragments of microbes that grow on water-damaged buildings.

And therefore, this very exciting research from Finland has implemented a new method to assess toxicity indoors, which looks at collecting condensed indoor air water vapour and test that.  Now what does this mean?

Well, essentially, they have devised and patented a method of rapidly collecting water vapor out of the air but again, how did they do this?

It's basically an accelerated method of the Coke can effect and what I mean here is that if you bring a cold object into an environment with even ambient or preferably warm air, condensation is going to form on the outside of the can.

And this Patent uses a metal collector and dry ice to rapidly cool the surface of the metal which in turn, allows for condensation from the air space inside this suspect office (or other suspect indoor area) to form.  That condensate was then used to test for toxicity.

What the scientists did is they wanted to test for toxicity in vitro, as well as in vivo. The Mycotoxin urine screening assay is a well-known method that clinicians can use to measure for mycotoxins at least to try to work out whether people complaining of water damage and mould-related exposure symptoms do in fact show elevated biomarkers for specific mycotoxins. The reason for this is that different moulds produce mycotoxins which can become aerosolized. Because they are essentially chemical components rather than cell or cell wall materials.

The Finnish scientists used three toxicity test methods to see how the indoor air might be compromised. The first one was to use THP-1 macrophages. Now these are a type of white blood cell that can digest or destroy foreign substances, like invading microbes or even cancer cells. Macrophages also have the ability to help recruit other immune systems by presenting antigens to T cells. This phenomenon is linked to inflammation because they can release cytokines. And so the scientists tested for toxicity against both monocytes and macrophages.  Monocytes are interesting as a toxicity assay in their own right because monocytes are particularly effective at digesting or destroying gram-negative bacteria. And we all know that whenever fungi are present in water damage building interiors, bacteria and yeasts are also present.

The next type of test they used to assess for toxicity in vitro wants to use baby hamster kidney cells or BHK-21 cells. These are commonly used to study viral infections, but they can also be used to determine the sensitivity to a drug or to a virus. Scientists use these to test what substances can damage these cells and therefore interfere with growth.

If you delve into the peer-reviewed literature, there are some very interesting studies that have used baby hamster kidney cells to test for the impact of lead microparticles in the air space on cell fitness. This is particularly relevant when we consider that historically, many paints contained lead and as a home ages, some of that paint flakes off from selected surfaces and can easily become airborne and interfere with children's and adults health. So there is good historical impetus for using BHK-21 cells to measure toxicity.

And now the third type of toxicity assessment the Finnish scientists used was boar sperm. And this is a bio sensor-type test for detecting toxins in indoor dusts and bioaerosols. The reason it works is because sperm are highly dependent on mitochondria for energy, and therefore any drug can be tested for how it might interfere with motility and sheds light on interference with mitochondria. This is particularly relevant for those who consider they might be exposed to water damage building interiors.

So, if we drill into a typical mycotoxin profile from urine analysis (e.g. Mycotox), we can see a range of different mycotoxins related to the key fungi that produce them. And the results are reported showing a normal range or an abnormal range. These types of reports are typically used by the clinician to determine whether that individual is in fact showing an accumulation of mycotoxins in their body.

If we drill into one of the key tables in the Finnish research, we find that of course, various different toxins picked up in the mycotoxin screening panel, like Ochratoxin were present in each of the workers who worked in this new office location. But of extreme interest is a new biomarker called Mycophenolic acid, and this also was present in almost all of the individuals who worked in this particular office.

And if we look into the table where this data is reported, we find that there is quite a significant range between the minimum and maximum concentration which is really good when you're looking for a biomarker that might be useful for assessing which individuals demonstrate strong susceptibility to mould exposure. A large range offers may opportunities for threshold-based classification when interpreting the lab findings.

So what is mycophenolic acid? Well, it's been known about for many years. It is in fact, extracted from various Penicillium fungi. It’s used as an immune suppressant drug specifically to minimize rejection, for example, after kidney transplants.

Now, you need to remember that because large volumes of indoor air are inhaled every day, this air contains water vapour. And when the relative humidity indoors and temperature increases, the levels of mycotoxins that are inhaled will also increase.   So this type of research is contributing cutting-edge new knowledge about the different toxins that are being inhaled, along with the more common fungal particulates, like mould spores together with the PM2.5 and PM10 cell wall fragments from fungi.

If we drill into the data on the liquid chromatography-mass spectrometry plots that the scientists report in their paper, we can see that mycophenolic acid shows a dominant peak with the control peak and why this is important is that using liquid chromatography-mass spectrometry, this platform is able to isolate the mycophenolic acid in the patient's urine.

And this is a key finding, because we know from first principles that mycophenolic acid is used to minimize rejection in people needing transplants. But the reason it does that is that the surgeon is attempting to dampen the immune response, so the transplanted tissue or organ isn't rejected.

But what about all those people who are working in water-damaged building interiors? We know if they're being exposed to particulate matter, like mould spores and cell fragments, from typical indoor air quality tests like spore traps, bio tape lifts or direct microbiology from the air or surfaces onto Petri plates.  But many of the mycotoxins can also be measured in urine? Thanks to this breaking research, there are other, new biomarkers like mycophenolic acid – which is tested from the water vapour indoors.

In turn, what do you think the contribution is to adverse health from mycophenolic acid exposure? The Finnish data shows that mycophenolic acid reduces immune function and the other types of in vitro tests showed that macrophage activity is reduced and that mitochondrial activity is increased, but also that bore sperm motility is interfered with.

Anyone who is currently suffering or thinks they're suffering from exposure to water damage indoors or mould - I urge you to read this paper.  Download it and share it with your healthcare provider or clinician and consider the impact of not just the mould spores, but the water vapour you're inhaling every day which according to the latest research is now shown to cause severe toxicity to a range of cell lines used to establish biological health. The potential role for mycophenolic acid screening of the indoor water vapour is likely to change the landscape for how we understand illness caused by mould exposure.